Remember when the Wuhan corona-virus first surfaced in December 2019, right from Day One, the initial reaction of the Chinese Communist Party was to deny that anything devastating was happening. It was declared “controllable” until the evidence was getting out of hand and became a “public health emergency” of worldwide concern in just over a month: from “no human-to-human transmission” to tens of thousands of confirmed cases. 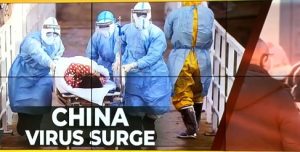 The COVID-19 or corona virus pandemic is the greatest global crisis of this century threatening each of the 7.8 billion people on earth. Nobody could have ever imagined that this silent killer of a disease would shatter so many lives and have far-reaching consequences rendering people homeless and jobless, disrupting markets and economies and shaking up political and economic power with an unpredictable future.

As the world still struggles to overcome the coronavirus pandemic, a new virus from China has started attacking China fatally and experts alert the world to get cautious.

Just before the Chinese Lunar New year on 12th February this year, the new coronavirus cases in China hit a 10-month high, prompting the lockdown of 28 million people in two provinces. This completely disrupted logistics and industrial activity, with millions grudgingly having to scrap the New Year holiday travel plans. This obviously was a blow to China’s efforts to get consumption back on track.

Activities like wedding banquets and other large gatherings have been responsible for latest outbreak.

After a resurgence in coronavirus infections in Beijing, China’s appetite for salmon and other seafood  crashed and Beijing as usual, shifting responsibility traced it to chopping boards for imported salmon in a wholesale food market in the capital.

Virologists believe that the infection may have been passed on to humans by ticks and that the virus can be transmitted between humans. Doctors warned that tick bite is the major transmission route, as long as people remain cautious, there’s no need to over panic over such virus contagion.

Dr. Yan Li-Meng who sought asylum in the U.S during the pandemic when asked if the Chinese government was trying to cover up the origins of the virus, said that COVID-19 is an “enhanced SARS virus” with components of the SARS virus as well as “other lethal parts.” When asked if the corona-virus was the result of work on vaccines and therapeutics or a bio-warfare program, Yan said that based on her experience of working on developing vaccines, “I can tell you this is definitely not for a vaccine or solution of the SARS virus.” This is the evil design of the Chinese Communist Party to prove their dominance over the world.

The outbreak of another new virus in China is alarming to the world and the experts are of the opinion that countries must get cautious of this virus lest it caused an onset of another pandemic.

China’s latest Wuhan Virus outbreak keeps getting bigger. Multiple hotspots are now conducting a second round of mass testing. China is building six hospitals in Hebei- a province where a testing lab was caught falsifying reports. Please view this video on how China is struggling to figure out the extent of its latest outbreak.