Did you know the Chinese Communist Party is stealthily making inroads into Indian newspapers? 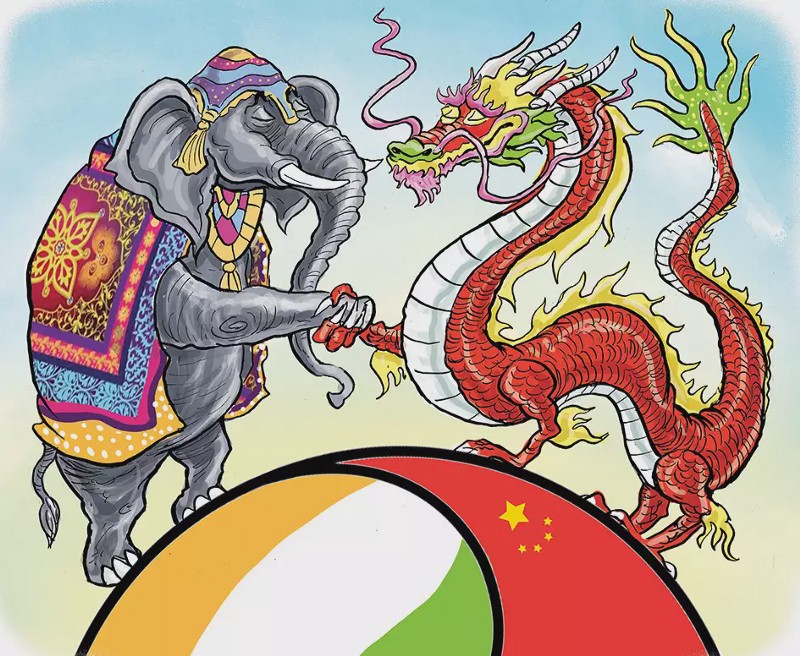 It is a well-known fact that Newspapers survive because of advertising revenue and funding from political parties. But it is shocking to find that leading Indian newspapers are selling their souls and helping the Chinese Communist Party to plant Trojan Horses in India, in the minds of newspaper readers in India. This is done through Chinese Officials Op-eds in Indian Newspapers and Advertorials. To put it simply, an Op-ed is an opinion piece published in print media opposite the editorial page (hence the term “op–ed“).

All countries indulge in Op-ed writing but what is cause for concern about the Chinese Communist Party’s modus operandi is the Frequency, the Content Style, the biased views, lack of Reciprocity, and of course mislabelling op-eds by PRC ambassadors as “analysis” or “personal views”.

From February 2020 to May 2020 there have been at least 6 op-eds by Chinese officials in Indian newspapers. It almost appears like the Chinese missions in India have a regular column. Most of the op-eds are co-authored by freelance Indian journalists.

Mar.13: The Hindu: Fighting COVID 19 together for a shared future

April 06: Free Press Journal: India and China can show the way in fighting the virus

May 08: Indian Express: Enemy is corona virus, not China

Chinese Officials op-eds are one-sided and almost always talk about the success story of China and the greatness of Xi-Jinping. Their op-eds don’t hesitate to attack Indian partners by name or touch on issues sensitive in/to India.

By lack of Reciprocity, we mean Indian officials get limited space in Chinese media and there are many restrictions. An Indian ambassador cannot write op-ed regarding Kashmir or Arunachal whereas The Peoples Republic of China did quite easily on Tibet. Writing anything against Pakistan is taboo but the PRC ambassador happily attacks the US.

Let us talk about Advertorials. They are basically Advertisements disguised as articles or editorials passed off as coverage rather than Ads. For instance, the Embassy of the People’s Republic of China passes off these Advertorials as media publishing views (rather than “we placed an ad”). Recently, a full-page Ad the Chinese embassy placed in a leading newspaper highlighted it as “Indian media publishes special page” 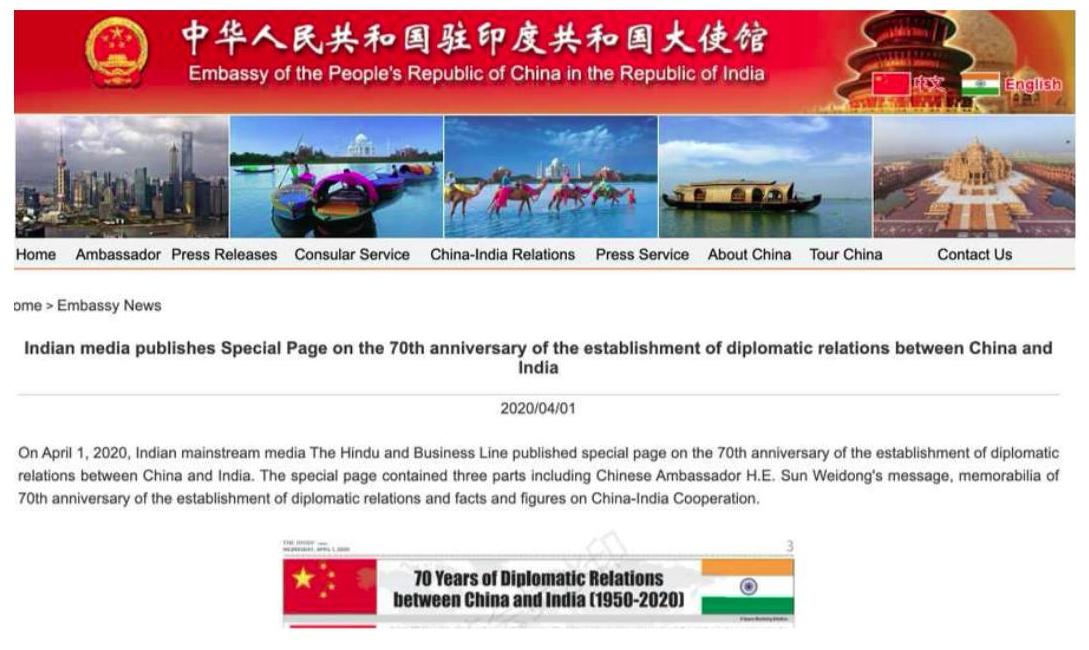 On April 1, 2020, Indian mainstream media The Hindu and Business Line published a Full page Feature on the 70th Anniversary of the establishment of relations between China and India. 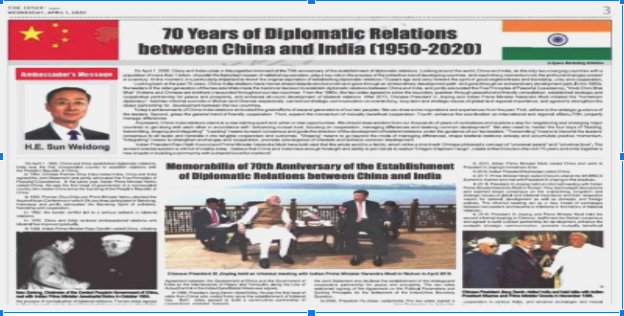 As per The Print, journalists are allocated apartments in one of Beijing’s plush residences, the Jianguomen Diplomatic Compound, where a two-bedroom apartment costs 22,000 Yuan (Rs 2.4 lakh), a 5,000 Yuan monthly stipend for some (Rs 50,000) and free tours twice-every-month to different Chinese provinces.

The fact that China is ‘grooming’ journalists from other countries speaks volumes of its vile intention of taking control of the media in various countries.

The Damage is huge when Indian media colludes

The impact of this drive was seen in 2018 when an article appeared in Indian media reporting that Sri Lankan President had accused Indian foreign intelligence agency- Research and Analysis Wing (R&AW)- of meddling in Sri Lankan politics. The report was swiftly denied by the Sri Lankan president. The report was hugely damaging for relations directly benefiting China.

The Chinese Communist Party has come to realize that paid propaganda for the communist party has no credibility whatsoever and is now hiring foreign journalists to paint a rosy picture of China and show the dragon in a positive light.

The complicity of media houses towards China is reminiscent of the Soviet-era influence on Indian media which, according to Mitrokhin archives, was largely in the pocket of the KGB. It planted many stories in Indian media and now the Chinese Communist Party is also trying to do the same under President Xi Jinping’s call in 2016 to “tell China’s story better” to the world.

The Elephant and the Dragon equation

A thought-provoking piece by Charu Sudan Kasturi in The Telegraph draws parallels between the Chinese Communist Party and the Indian government. He throws some pertinent question:

Is the Indian government following the template of the Chinese government? Since 1989, the Chinese government has insisted that the Tiananmen Square protests and other protests were kindled by support from the West and America in particular. Similarly, the Indian government wants everyone to believe that behind the farmers’ protests against controversial laws there is the Khalastani conspiracy, aided and abetted by the teenage Swedish climate activist, Greta Thunberg.

Drawing parallels with China’s vaccine diplomacy efforts while encroaching on the territories of its neighbours, Tripura’s Chief Minister Biplab Deb has spoken of plans being hatched by the current government to install governments in neighbouring Nepal and Sri Lanka. Trying to expand footprints in these nations like how China is doing will of course be met with resistance.

An Advertising professional writes blogs on various topics ranging from health and spirituality to technology and sports.
China covers up again the 2021 second wave of a possibly more lethal virus Can You Imagine A Nation Methodically Trying To Eliminate Its Own Citizens?