Did you know the whole world collaborated with Xi JInping to spread the pandemic? And they are doing it again!

Like it or not, we are all guilty of collaborating with Xi Jinping for spreading the pandemic.

For a lot of people around the world, it’s just been convenient to go along with the Chinese Communist Party (CCP) which has been throwing its weight around globally to pressure, to intimidate, using economic and political clout. 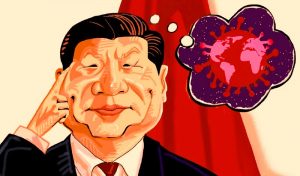 If you look at the pattern of the outbreak of COVID19 or Corona virus all over the world, one thing that clearly emerged was: all countries that got close to the Chinese Communist Party (CCP) either for business or financial inducements or fell into the debt traps were the worst affected. It was like signing a death warrant!

Let us talk about the Super power US which today is the worst affected by the pandemic.

Look how the U.S played into the hands of the Chinese Communist Party.

New York is the main base for the propaganda of the (CCP) Chinese Communist Party. Wall Street also uses investors’ funds to invest in companies controlled by the CCP for the benefit of themselves through regulatory loopholes.

Chinese firms go scot-free, are not audited by the New York Stock Exchange. The United Nations turns a blind eye to China’s human rights abuses. The mainstream media in the West has for years printed Xinhua propaganda as fact. New York, NBA and Hollywood have become the Chinese puppets of avoiding the taboo topics of the (CCP) Chinese Communist Party

For decades, the Chinese Communist Party’s atrocities, such as genocide, concentration camps, forced organ harvesting was never an impediment to FDI. American medical companies willingly moved their factories to China, with no consideration for national health and security consequences. The short-sighted decision of relocating vital supply chains in a Communist country half a world away is now staring them in their face, as Americans discovered their medications run out during this pandemic.

China’s global interests, stem from its desire of upholding the authority and ensuring the dominance of the Chinese Communist Party (CCP). The global outbreak of the made in China novel Corona virus demonstrates that the Chinese Communist Party (CCP) is more than willing to endanger the health of the international community to promote Beijing’s irresponsible dominance.

History repeats itself with the Second wave of Covid 19

It has become increasingly clear that Germany’s economic entanglement with China has become so extensive that reversing it is no longer a realistic option. Since October, German Chancellor Angela Merkel has been pushing for the European Union to agree to a major trade deal with China. The deal was quietly sealed in the final weeks of 2020, potentially hampering joint U.S.-European efforts to address CCP challenges.

The business partnership between Germany and communist China has also extended to vaccines. China announced on December 16 that it was sourcing 100 million vaccines from Germany’s BioNTech.

The U.K. government’s deepening relationships with the CCP is alarming. Until recently, Downing Street was lauding itself as ‘China’s best partner in the West’ and was committed to intensifying its proclaimed ‘golden era’ of relations with Beijing,”

Many countries that were up in arms against China are now making a beeline for the Chinese vaccine. Brazil made a deal with China for 90 million Dollars. Other countries include Bahrain, UAE, Morocco, Turkey and Indonesia.

So who is to blame if China can get away with inflicting such a huge calamity on humanity? It is so apparent that the liberal democracies are self sabotaging and becoming victims of an authoritarian regime challenging their survival.

As the world pushes you into isolation as the means for survival and you resign yourself to ‘Lockdown’ as a way of life, there couldn’t be a more dismal and grim future staring you in the face, created by China’s amoral leadership.