The City of Gold is home to many people with different backgrounds and ethnicities – it was my home too for the hottest two years of my life. Where I learned how to expertly apply make-up that didn’t slide off my face, survive daily heatstroke, and see through sandstorms. Dubai builds skyscrapers and character.

Visitors to Dubai may be in for a bit of a culture shock. As well as interacting with people from every corner of the globe, you will socialize with traditionally dressed Gulf Arabs. There is also the sound of the mosques at prayer time, the fragrant smell of hookah (shisha), and acquiring a taste for Arabic coffee – which by the way, puts an Italian Espresso to shame … it is all part of everyday Dubai culture. Let’s get started!

It’s essential to remember that Dubai is an Arab emirate – although it’s the most liberal of all the emirates, there are a few cultural constraints that tourists and expats should be mindful of. Islam is intricately intertwined in the very fabric of society in the UAE and impacts every aspect of not only the local’s lives, but also the tourists and expats.

Older and more traditional Dubai citizens may be more reserved, however, hospitality plays a key role in society, especially to newcomers. It is not unusual for locals to approach you and strike a conversation just out of curiosity – Dubai locals are very curious by nature, and enjoy chatting to foreigners.

As a rule of thumb, just be open minded to everything, that way the culture shock is minimized. 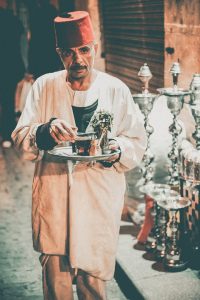 The call to prayer occurs five times a day – and for people who are not used to this booming display of faith it can take some getting used to. Not only the noise – but the fact that everything, and I mean everything comes to a grinding halt when it’s time for prayers. People park their cars wherever – even on the highway – to get to their prayers on time. Need to get to work? Not a chance – only recently has the Dubai metro started operating before Friday namaz. 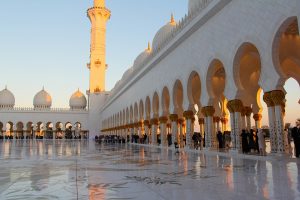 Fridays are quiet. And the whole week seems back to front – Since Thursday is actually the end of the week, Friday and Saturday are the weekend, and Sunday is the start of the week – so essentially a Monday. It’s confusing – yes. And working on a Sunday took some getting used to.

What about Ramadan? Ramadan is one of the holiest occasions for Muslims and the UAE is no exception. In fact, all residents and visitors must refrain from eating or drinking in public during daylight hours – regardless of their faith. Non-Muslims may eat and drink in designated areas, and many hotels and shopping malls will have various outlets that remain open during Ramadan. Many canteens are boarded up to shield the hordes of people munching their lunches. It is a wonderful time to experience the local culture and profound religious values. I even fasted for Ramadan during my second year in Dubai, not only to appreciate the philosophy of the society but also to partake in my husband’s faith.

Although Dubai is an Islamic emirate, other religions are allowed to be practiced, for instance there is a church compound in Jebel Ali with Christian churches and there is also a Sikh temple. Dubai is open to different faiths; however, preaching is not tolerated.

Is It Really That Strict?

Visitors should keep in mind that, a more modest code of conduct is vital, since Dubai is a Muslim city. There are a few no-no’s that are universally understood. Here’s the down-low:

When it comes to Dubai, it’s better to err on the safe side. Now that that’s out of the way – let’s have some fun!

What many people don’t write home about: The prostitution – yes it happens, but many people have a “Don’t ask, don’t tell” approach to these things.

There are oodles of various nationalities living and working together in the UAE. Over 80 percent of people in the city are expatriates. Meaning that expats outnumber the locals! The bulk are from Asia, predominantly India, Pakistan, Bangladesh and the Philippines, while Westerners, account for around a tenth of inhabitants. Increasing globalization and the settling of various immigrant groups have given rise to a cosmopolitan culture that is in sync with other international cities.

Arabic is the local language of the UAE and many of us overindulged the idea that we would be speaking fluent Arabic within a year! Almost every single expat has been through the disbelief that you don’t have to know Arabic to live in Dubai. Since, the majority of expats in Dubai are from India and Pakistan, you’ll more likely pick up a few phrases in Hindi or Urdu instead. I credit most of my Hindi vocabulary to the helpful colleagues I worked with. But throw in an odd Arabic phrase here and there and you’ll definitely gain some favour.

English is spoken everywhere, but out and about in Dubai, it is not uncommon to hear many different languages. Arabs are generally gracious people and it is deep-rooted in their culture to accommodate people. Therefore, you seldom hear Arabic people saying anything in the negative tense. If they do, they say “no” in such a diplomatic manner that one is not sure whether they said no – this can be confusing. My boss was a Middle Eastern man, and I often found myself bemused by how he would use the long way round to explain his disagreement, instead of simply saying no. Want to learn some Arabic Habibi? Yallah!

Common Arabic Phrases All Expats Find Themselves Using: (Whether they want to or not!)

Arab Riches Are in A League of Their Own:

With the indulgent customs of many settlers and the high standard of living set by locals, Dubai’s culture has progressively grown towards one of opulence. A blend of local prosperity and visions of a Middle Eastern tourist Mecca resulted in various forms of infrastructure, that cater to pleasure-seekers and extravagant lifestyles. Urban Dubai is the epicenter of innovation. “Dubaizing” was coined in other corners of the globe to indicate a type of fortune only known to the Middle East.

But trust me, you’ll get used to feeling underdressed and spotting gold-plated Rolls Royce’s in the traffic. You can always spot the newcomers by their dropped jaws!

While the revolutionary skyscrapers of Dubai are enthralling, nothing compares to the raw beauty of the desert surrounding the city. From riding a camel over cooling sand dunes, to smoking Hookah whilst the sun disappears behind the sand, the desert experience is truly breath-taking. 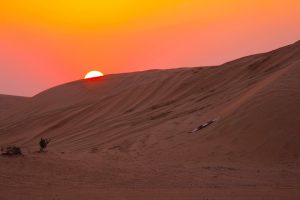 But Dubai can be breath-taking in another way too. Reading about how hot it can get in Dubai and actually experiencing it first-hand, well it can knock the wind out of you. Especially during the summer! Burning eyes, constant sweating, parched mouths, and agonizing headaches are just some of the glamorous consequences we all endure when first getting used to living in Dubai. I never thought I’d get used to it, with standard temperatures reaching to highs of melt-your-face-off, so when the temperatures start to drop, anything under 40 feels like heaven.

Top Tip: Whenever a breeze appears – be grateful! And if it rains – which is considered miraculous if it happens more than 4 days a year – stop what you’re doing and go stand outside immediately.

Most of Dubai’s charm lies in the fact that it epitomizes the term ‘cultural melting pot’ and though expats are likely to experience some culture shock in Dubai, odds are they are more likely to discover a place where they feel right at home – and a bit of heat-stroke! Dubai is proud of its Arabic culture but also appreciates every other nationality present. On my first day in Dubai, I was overwhelmed by all these skyscrapers around me while I was driving to work, and suddenly the Burj Khalifa appeared as if out of nowhere – this overpowering structure that just leads straight into the clouds – and that is exactly how I would describe the culture in Dubai. You’re having an average day and then you experience it all at once.

I’m Lauren, but you can call me Lau. A free-spirited soul from South Africa. I am a freelance writer, certified copywriter, and lifestyle blogger. When I’m not writing, I’m traveling around the world with my husband, meditating, or learning something new. I seldom sit still but when I do, I can often be found with a book in one hand and a glass of wine in the other. I dabble in photography, tarot reading, talking as much as humanly possible, and eating spicy food. Delight in some of my fascinating encounters here or explore my blog: Goddess of the Quintessential.
Republished | Exploring Dubai (Part 1) | Food Culture Exploring the Food Culture of Canada