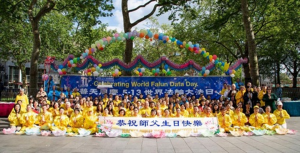 May 13th holds a special significance for people all over the world whose lives have been positively impacted and transformed by Falun Dafa, an ancient spiritual practice of mind and body. Falun Dafa, also known as Falun Gong, was introduced to the public in China in 1992 by Master Li Hongzhi. From a remote age, this practice has been passed down from a Master to a single disciple. Today, it is being practised by more than 10 crore people in over 120 countries. The main teachings of Falun Dafa are available in over 40 languages.

In addition to the teachings, Falun Dafa also offers a set of five simple meditative exercises  based on slow, gentle movements and meditation that are easy to learn and are taught absolutely free of charge. The practice has many beneficial effects and can help uplift one’s physical health, spiritual well-being, and moral character, not to mention its undeniable positive influence on the community and society as a whole.

In Falun Dafa, the exercises, though important, are in fact secondary to the “cultivation” of one’s character. Falun Dafa emphasizes the improvement of one’s moral standard by adhering to the three principles of “Truthfulness-Compassion-Tolerance.”

Many heart-warming and inspiring experiences have been shared by people who have experienced positive changes through the practice. 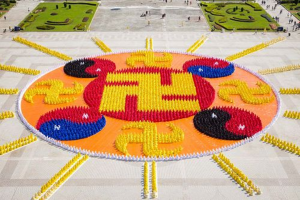 Falun Dafa was introduced in India in 2000 and officially registered in 2004. Since then, the exercise and meditation practice has been introduced in schools and colleges across the length and breadth of the country. Falun Dafa was well received by the Police academies in Delhi and Hyderabad. Falun Dafa practitioners have been invited by several large organisations to introduce it to their senior executives. Interestingly, jail superintends have also requested an introduction of the exercise and meditation practice to inmates.

Ever since its inception in 1992 in China, Falun Gong gained immense popularity among the Chinese people because of the dramatic health benefits and improvement in moral standards that people experienced . Within a few years, nearly 100 million Chinese people took to the practice fervently. Many high ranking government and armed forces officials were among those who embraced the practice.

As May 13th approaches, marking the 27th anniversary of introduction of Falun Dafa to the public, we note that people from more than 120 countries have happily embraced this ancient meditation discipline. Those cultivating themselves in this incredible practice are singing its praises, and why wouldn’t they? The virtues of Falun Dafa certainly bring much benefit to a person. It’s a wonderful “phenomenon” as described by Dr. Dong, worth cherishing.

In most countries political leaders join World Falun Dafa Day celebrations to support freedom of belief and recognize the practitioners’ contributions to their communities. The amazing phenomenon of Falun Dafa is summarized in the words of Mark Palmer, former U.S. Ambassador to Hungary and board member of the Freedom House: “Falun Gong is the greatest single spiritual movement in Asia today. There is nothing that begins to compare with it in courage and importance.”

Republished | Skin care tips for humid weather What happened to the Tank Man?